Michael O. Emerson (Ph.D., Sociology, 1991, University of North Carolina, Chapel Hill) teaches courses in urban sociology, race and ethnic relations, religion, and statistics. His main research interests lie in these areas as well. Emerson has focused most closely on the role of race in shaping social action in the United States and beyond, recently by focusing on health, residential segregation, and on the institution of religion.

Considered one of the leading scholars on race and religion, his work in this area began with Divided by Faith: Evangelical Religion and the Problem of Race in America (Oxford University Press, 2000), which was named the 2001 Distinguished Book of the Year by the Society for the Scientific Study of Religion. This work has been followed up by several award-winning works, including United by Faith, Against All Odds, People of the Dream, and Blacks and Whites in Christian America. He has authored several other works in these areas such as Transcending Racial Barriers, Religion Matters, and is co-editing a new volume called The (Un)Making of Race and Ethnicity: A Reader.

Emerson currently is directing the Panel Study of American Religion and Ethnicity (PS-ARE). Funded by the Lilly Endowment, this study is following the same 1300 people over the course of their lives. The first round of interviews was completed in 2006, and the second wave was completed in 2012. With oversamples of African Americans, Asian Americans, and Latinos and over two hundred questions on religion, this study provides one of the nation's richest data sets for understanding religious life within racial and ethnic communities.

His latest line of research is on the role of migration on urban growth across nations, city development, urban transportation, and the future of cities. Currently he is working on a book examining how cities are developing in the post-modern world, tentatively entitled A Tale of Cities: Houston, Copenhagen, and Our Urban Future. He currently serves as co-director of the Kinder Institute for Urban Research. As part of this role he heads up the international, comparative study of cities. For more information on the Kinder Institute, visit the KINDER site. 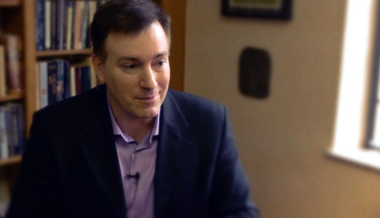 Building the Soul of A City

A System of Racialization

Michael Emerson talks about the history of race and immigration in the United States.

Bringing Us All Together

Michael Emerson talks about how to be “transformed by the renewing of [our] minds.”

Michael Emerson talks about the “hunkering down effect."

Michael Emerson talks about how city design is actually working against the happiness of people.