Mark Labberton was named president of Fuller Theological Seminary as of July 1, 2013, after serving as Lloyd John Ogilvie Associate Professor of Preaching and director of the Lloyd John Ogilvie Institute of Preaching since 2009. He came to Fuller after 16 years as senior pastor of First Presbyterian Church of Berkeley, California. Dr. Labberton has been involved in ministry for over 30 years and has spoken before a broad range of audiences, including numerous conferences and events for the Presbyterian Church (USA), InterVarsity Christian Fellowship, the National Pastors Convention, and the International Justice Mission. He has also taught courses at New College Berkeley for Advanced Christian Studies.

In 1982 Labberton co-founded the Christian International Scholarship Foundation (CISF)-an organization funding the advanced theological education of Christian leaders from the Majority World, including executives of relief organizations, college and seminary faculty, and denominational presidents-and served on the board of CISF for 17 years. He has also worked closely with John Stott Ministries, the U.S. member of Langham Partners International, which provides books, scholarships, and seminars for Majority World pastors. Labberton served as chair of John Stott Ministries from 2001 to 2004 and co-chair of the John Stott Ministries Global Initiative Fund from 2004 to 2007. Today he continues to contribute to the mission of the global church as a senior fellow of the International Justice Mission.

Labberton has authored the books The Dangerous Act of Loving Your Neighbor: Seeing Others Through the Eyes of Jesus (2010) and The Dangerous Act of Worship: Living God's Call to Justice (2007). He has published articles in periodicals such as Christianity Today and Radix, as well as Leadership Journal, for which he also serves as contributing editor. 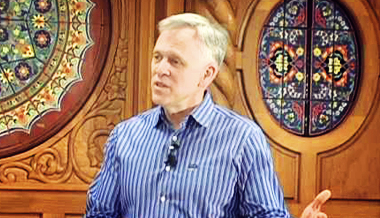 Mark talks about what breaks his heart.

Our churches should be schools of love, not bureaucratic entities.

An invitation to exilic living and loving enemies.

Invitation To Something Larger

The Church often is known for taking great things and making them small. Jesus invites us into something larger.

What we can learn from the Global South?