Thomas Nelson released Ian’s spiritual memoir Jesus, My Father, the CIA, and Me: A Memoir…Of Sorts in June 2011. Publishers Weekly described the book as, “Simultaneously redemptive and consoling with bright moments of humor…a story chock-full of sacredness and hope.”

The book was chosen as a featured title in the prestigious Barnes & Noble Discover Great New Writers program.

In addition to writing, facilitating retreats, and speaking around the country, Ian is an adjunct priest at Christ Episcopal Church in Greenwich, Connecticut where he curates the Conversations in Courage and Faith series (www.courageandfaith.org). He is also a student at Fordham University (The Jesuit University in New York) where he is completing his doctoral work in Christian spirituality.

Ian adores the Rolling Stone’s record Exile on Main Street, and the melody to Lulu’s 1967 hit song “To Sir, With Love” has been stuck in his head for more than thirty years. He can explain the former, but not the latter.

Ian divides his time between living in Tennessee and Vermont with his wife, and three children. 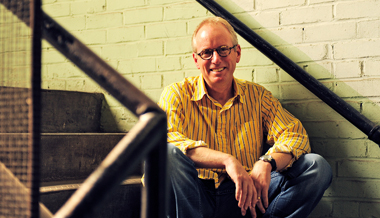 Theologian Dwight Peterson shares an intimate story about his last meal at The Table.

Ian Morgan Cron on the purpose of prayer.

The Bread and The WIne

Ian Morgan Cron on the mystery of the Eucharist.

Is silence the future of the church?