Dwight N. Peterson served as professor of New Testament at Eastern University. Dwight was on hospice (at home) since July 16, 2012, due to deterioration and infection of his hips and pelvis, secondary to the paraplegia he lived with since 1979. We’re sad to say that Dwight died in March of 2016. Someone said it better than I that "Dwight's whole way of being in the world expressed his faith: an openness that included everyone, a deep love of goodness without self-righteousness, a gentle interest in every person whose life touched his, a remarkable honesty about all the difficulties of just being human, a trust in the unconquerable love of his Creator. We will miss him, and are so grateful to have known him.” Rest in peace Brother. 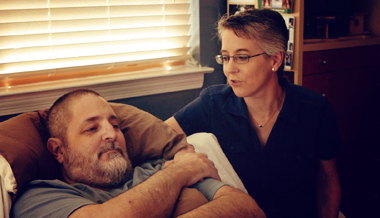 Station IV from The Way of the Heart series.

This Is Not The End

Theologian on hospice on anger and pain.

Theologian on hospice on resurrection.

Power Is A Problem

The Gospel helps draw you away from living for power.

Theologian Dwight Peterson shares an intimate story about his last meal at The Table.

Jesus told us to visit the sick, do you?