Emmanuel Katongole is Associate Professor of Theology and Peace Studies, University Of Notre Dame. His research interests focus on politics and violence in Africa, the theology of reconciliation, and Catholicism in the global South.

He earned his Ph.D. in philosophy from the Catholic University of Louvain and a diploma in theology and religious studies from Makerere University in Kampala, Uganda.

Katongole, a Catholic priest ordained by the Archdiocese of Kampala, has served as associate professor of theology and world Christianity at Duke University, where he was the founding co-director of the Duke Divinity School’s Center for Reconciliation.

He is the author of books on the Christian social imagination, the crisis of faith following the genocide in Rwanda, and Christian approaches to justice, peace, and reconciliation. His most recent book is The Sacrifice of Africa: A Political Theology for Africa (Eerdmans, 2010).

Professor Katongole's other books include Mirror to the Church: Resurrecting Faith after Genocide in Rwanda, (Zondervan, 2009), A Future for Africa: Critical Essays in Christian Social Imagination (University of Scranton Press, 2005), African Theology Today (University of Scranton Press, 2002), and Beyond Universal Reason: The Relation Between Religion and Ethics in the Work of Stanley Hauerwas (Notre Dame Press, 2000).

As a major part of his research at the Kroc Institute, Katongole will contribute to Contending Modernities, a cross-cultural research and education initiative examining Catholic, Muslim, and secular forces in the modern world. 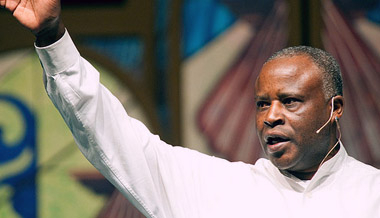 Seven film session on Jesus' invitation to follow Him.

A Glimpse at Communion

Emmanuel Katongole on reconciliation, communion, and the Cross.