Brian D. McLaren is an author, speaker, activist, and public theologian. A former college English teacher and pastor, he is an ecumenical global networker among innovative Christian leaders.

From 1978 to 1986, McLaren taught college English, and in 1982, he helped form Cedar Ridge Community Church, an innovative, nondenominational church in the Baltimore-Washington region (crcc.org). He left higher education in 1986 to serve as the church's founding pastor and served in that capacity until 2006. During that time, Cedar Ridge earned a reputation as a leader among emerging missional congregations.

Brian has been active in networking and mentoring church planters and pastors since the mid 1980's, and has assisted in the development of several new churches. He is a popular conference speaker and a frequent guest lecturer for denominational and ecumenical leadership gatherings - across the US and Canada, Latin America, Europe, Africa, and Asia. His public speaking covers a broad range of topics including postmodern thought and culture, Biblical studies, evangelism, leadership, global mission, spiritual formation, worship, pastoral survival and burnout, inter-religious dialogue, ecology, and social justice.

He is primarily known, however, as a thinker and writer. His first book, The Church on the Other Side: Doing Ministry in the Postmodern Matrix, (Zondervan, 1998, rev. ed. 2000) has been recognized as a primary portal into the current conversation about postmodern ministry. His second book, Finding Faith (Zondervan, 1999), is a contemporary apologetic, written for thoughtful seekers and skeptics. (It was later re-released as two short books, "A Search for What Makes Sense" and "A Search for What is Real.") "More Ready Than You Realize" (Zondervan, 2002) presents a refreshing approach to spiritual friendship. "Adventures in Missing the Point" (coauthored with Dr. Anthony Campolo, Zondervan, 2003) explores theological reform in a postmodern context. "A Generous Orthodoxy" (Zondervan, 2004), is a personal confession and has been called a "manifesto of the emerging church conversation."

His first work of teaching fiction (or creative-nonfiction), "A New Kind of Christian" (Jossey-Bass, 2001), won Christianity Today's "Award of Merit" in 2002, and has become one of the pivotal texts for what is increasingly called "Emergence Christianity." It was followed by "The Story We Find Ourselves In" (Jossey-Bass, 2003), which seeks to tell the Biblical story in a fresh way. Brian concluded this trilogy with "The Last Word and the Word After That" (Jossey-Bass, 2005), a book that reopened the question of hell and final judgment.

In "A New Kind of Christianity" (HarperOne, 2010), Brian articulated ten questions that are central to the emergence of a postmodern, post-colonial Christian faith. His 2011 HarperOne release, "Naked Spirituality," offers "simple, doable, and durable" practices to help people deepen their life with God.

Brian's "Why Did Jesus, Moses, the Buddha, and Mohammed Cross the Road? (Christian Identity in a Multi-Faith World)" is the premier release of Jericho Books (September 2012). It explores the intersection of religious identity, inter-religious hostility, and human solidarity.

Brian's books have been translated into many languages, including Korean, Chinese, French, Swedish, Norwegian, German, and Spanish. He has written for or contributed interviews to many periodicals, including Leadership, Sojourners, Tikkun, Worship Leader, and Conversations. He is an active and popular blogger, a musician, and a songwriter, offering a variety of resources through his website, www.brianmclaren.net.

A frequent guest on television, radio, and news media programs, he has appeared on All Things Considered, Larry King Live, Nightline, and Religion and Ethics Newsweekly. His work has also been covered in Time (where he was listed as one of American's 25 most influential evangelicals), Christianity Today, Christian Century, the Washington Post, Huffington Post, CNN.com, and many other print media.

He has taught or lectured at many seminaries and has served on a number of boards, including Emergent Village (emergentvillage.com), Sojourners (sojo.net), Mars Hill Graduate School (mhgs.edu), International Teams (iteams.org), and Off The Map (off-the-map.org), and he is a founding member of Red Letter Christians (redletterchristians.org).

Brian is married to Grace, and they have four adult children. His personal interests include wildlife, ecology, fishing, hiking, music, art, and literature. 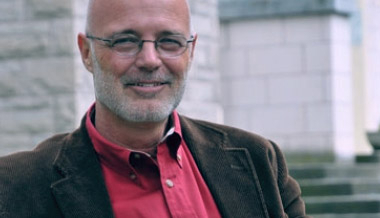 Justice, Power and the Kingdom STATION I

Station I from The Way of the Heart

We Make The Road By Walking: ONE

Will you wait and become stagnate or will you become a protagonist in your own story?

We Make The Road By Walking: TWO

Author Brian McLaren invites us to consider scripture with a fresh and new set of eyes.

Have you become a Christian conformist instead of a follower of Jesus?