Sally Morgenthaler is recognized as an innovator in religious practices worldwide, catalyzing new trends in worship, congregational systems, gender relations, and leadership. Known best for her work in The Emergent Manifesto of Hope, Morgenthaler’s “Leadership in a Flattened World” called for a major shift in how clergy lead congregations: from command-and-control paradigms to radical collaboration. For the past two decades she has been a trusted interpreter of post-religious culture, as well as a prophetic voice — calling North American Christianity out of its inward-focus to become a transforming, generative presence in the world.

In early 2010 Morgenthaler left her work with religious institutions to explore the convergence of a developmental view of life (evolutionary) and spirituality. Interior Design: When the Inside Is the New Outside is her current book project, which explores the exponential rise of interiority vis-a-vis social networking, story-hunger (an increasing obsession with story, worldwide), the rise of the right brain (cultural creatives), advances in neuroscience, and an accelerating trend toward holism (the both/and). She is also co-authoring a book with Joseph Myers, titled, Technomadics: How People Belong and Behave Now. Technomadics reveals the shift into 21st century’s neo-nomadicism and maps its effects on everyday life.

Morgenthaler is also a professional nature photographer and resides in both Denver and L.A. 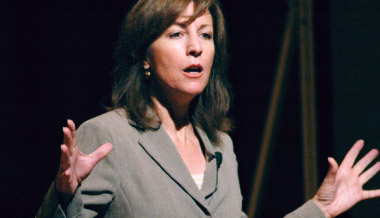 Are you running a business of leading sheep?

Addicted To The Building

Does God only move in our building? Sally Morganthaler on new portals and thoughts from Barbara Brown Taylor.