Professor Butler’s forthcoming book The Gospel According to Sarah on The New Press, explores the exploring the role of religion in Sarah Palin’s political action, and Palin’s influence on the Republican Party. Her first book, Women in the Church of God in Christ: Making A Sanctified Worldon The University of North Carolina Press is the first full-length academic book focused on The Women’s Department of the Church of God in Christ (COGIC). The book is an engaging look at African American women’s lives and civic engagement, highlighting how the of African American women’s social uplift in the church is rooted not only in respectability, but in strict religious beliefs.

A regular guest on the Melissa Harris Perry Show on MSNBC and a sought after media commentator, Professor Butler also provides commentary on contemporary politics, religion and social issues at Religion Dispatches, and her own blog, “You Might Think So” She also served as a consultant to PBS series God in America, and the American Experience on Aimee Semple McPherson.

Professor Butler’s future research projects include a book on African American Women education and missions work in the 19th and 20th century, and the sexual abuse cases in the American Catholic Church. 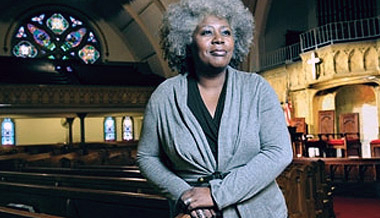 Thoughts on living from Anthea Butler.