As the inaugural Dean of Episcopal Divinity School at Union Theological Seminary, Rev. Dr. Kelly Brown Douglas leads the development of EDS at Union, which will allow students to fulfill requirements for ordination in the Episcopal Church while receiving their degree from Union.

A leading voice in the development of a womanist theology, Dr. Douglas is widely published in national and international journals and other publications. Her groundbreaking and widely used book Sexuality and the Black Church: A Womanist Perspective (1999) was the first to address the issue of homophobia within the black church community. Her latest book, Stand Your Ground: Black Bodies and the Justice of God (2015) examines the deep roots of “Stand Your Ground” culture in America and the challenges it brings for the Black Church community. Other books include The Black Christ (1994), What’s Faith Got to Do With It?: Black Bodies/Christian Souls (2005), and Black Bodies and the Black Church: A Blues Slant (2012) which seeks to move the black church beyond its oppressive views toward LGBT bodies and sexuality in general. 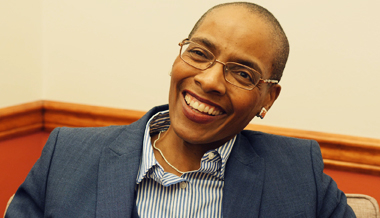 Calling Out for Life

How do you measure freedom?

The God That is Coming