Spanish-born Jon Sobrino is a Jesuit theologian known for his work in liberation theology. He escaped assassination in El Salvador when members of the military broke into the rectory at the University of Central America (which he helped found) and brutally murdered his six fellow Jesuits, their housekeeper, and her 15-year old daughter. Sobrino was traveling abroad at the time.

Sobrino, whose works include Jesus the Liberator (1994) and Christ the Liberator (2001), became well-known within the Catholic Church as a proponent of liberation theology. He has written:

In 2007, Sobrino was the subject of a theological critique and an admonishment by the Congregation for the Doctrine of the Faith. This move was interpreted by many as part of the ongoing attempt to halt the spread of liberation theology.

The Catholic Theological Society of America and other international groups protested the Notification concerning Sobrino, declaring it theologically dubious and unjust. Sobrino himself has said that, “to endorse these procedures would not in any way help the church of Jesus to present the face of God to our world.” 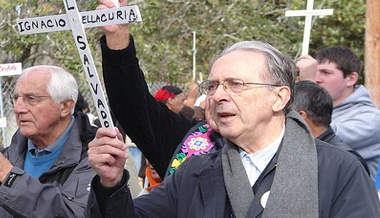 Jon Sobrino on liberation and salvation.

Jon Sobrino on the needed actions of the "privileged."