Jay Beck is a founding member of the band The Psalters. The Psalters are a genre unto themselves, defying easy categorization. A Philadelphia Weekly writer describes them thus:

I’m…watching the Psalters celebrate rootlessness and internationalism, mixing radical Christian propaganda with multiethnic polyrhythms and neo-Dickensian refugee ragamuffin chic. The woman next to me wears a full-on Middle Eastern burka, from which protrude long, electric green dreadlocks…The tall dude at the sound desk in the leather pants and the crazy pirate-looking mother in the front row are all members of the…Psalters–the crusty-punk, multiethnic, radical Christian equivalent of the anarchist Chumbawamba: part traveling circus, part live-by-example anti-patriotic slap in the face to the ticky-tacky Christianity peddled by millionaire preachers obsessed with their congregation’s genitalia.

The Atlantic says “Psalters mounts an ululating, multi-drum offensive against the capitalist hegemony. They dress the part, too—if you saw this lot coming on a dark night, you’d run.” Listen (and see) for yourself:

All we know is that we like them and their untamed sounds. They practice what they preach, too. They’re a communal NGO, partnering with refugee populations and indigenous groups in the work of radical justice through the art of worship. Hear their passion in this interview from a few years back with fellow Wild Goose co-conspirator Shane Claiborne:

Tired of status quo politics and religion? Like a soundtrack for exodus, Psalters’ aggressive blend of afro/arab/gypsy punk resists definition, demands attention, and pounds convention with a raised fist. Come to the Wild Goose Festival and witness the award-winning group the Chicago Tribune calls, “flaring, daring, and wholly original…a voice impossible to ignore.” 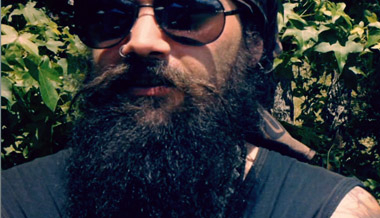 Artist and activist Jay Beck on Jesus, the devil, mystic paths and the gift economy,

Jay Beck of the Psalters on the role of the artist.