lia Delio, OSF is a Franciscan Sister of Washington, DC and American theologian specializing in the area of science and religion, with interests in evolution, physics and neuroscience and the import of these for theology.

Ilia currently holds the Josephine C. Connelly Endowed Chair in Theology at Villanova University, and is the author of seventeen books including Care for Creation (coauthored with Keith Warner and Pamela Woods) which won two Catholic Press Book Awards in 2009, first place for social concerns and second place in spirituality. Her book The Emergent Christ won a third place Catholic Press Book Award in 2011 for the area of Science and Religion. Her recent books include The Unbearable Wholeness of Being: God, Evolution and the Power of Love (Orbis, 2013), which received the 2014 Silver Nautilus Book Award and a third place Catholic Press Association Award for Faith and Science. 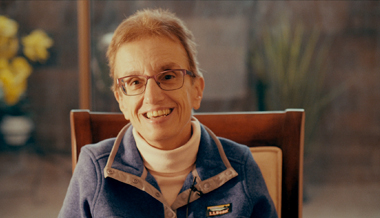 Has your imagination been co-opted?

Where there is God there is only we-ness.

Your inherent condition is not evil.

What does God do?

It Is Love that Matters

In the end it is love that matters. Words from Ilia Delio.