Darrell Johnson has been preaching the Gospel since 1970, serving as Senior Pastor of a number of Presbyterian churches in California, and of Union Church of Manila during the so-called "People Power Revolution." In the fall of 2000 he accepted an appointment to the faculty of Regent College, where he taught preaching, worship, pastoral theology and Biblical spirituality. Darrell has authored a number of books, including Experiencing the Trinity (now in French and Korean), Fifty-Seven Words That Change the World (on the Lord's Prayer), Discipleship On the Edge (on the book of Revelation), It is Finished (on the meaning of the death of Jesus), The Glory of Preaching: Participating in God's Transformation of the World, and Who is Jesus? In September 2009 he accepted the call of the historic First Baptist Church in downtown Vancouver to serve as Senior Minister. Darrell and his wife Sharon have been married 39 years, and have raised four children adopted from four different countries of the world. They have five beautiful grandchildren. 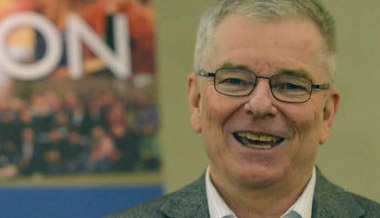 The Ascension and The Church

Author, professor and pastor Darrell Johnson discusses the ascension and understanding what the church is in our time.

The Ascension and Jesus Christ

Author, professor and pastor Darrell Johnson discusses the ascension, the magnetism of Jesus, the church and "christian entrprise."

The Ascension and The Lord's Supper

Author, professor and pastor Darrell Johnson discusses the ascension and the Lord's supper.

Are we experiencing the right kind of pressure? Are we caught within the empire and its pressure to succeed?

Is our image of Jesus compelling enough to sustain us? Do we see his sacrifice at the center of everything?

Fullfill What He Started

Do we name who it is people are longing for? Do we long for the one we name?