In 2005, third generation pastor Aaron Edwards left his predisposed idea of church to transplant his growing ministry and plant a new church at MainStreet Crossing in Tomball, Texas. The idea was simple, the trend was coffee-shop-community. However, in a short period of time, in what should have grown into a trendy, artistic community, became a home for broken and wayward souls. The "unchurched" taught him that if their faith wasn't transforming their lives, it was not a faith worth pursuing.  Aaron found himself being schooled by God in an entirely new and challenging way. What was revealed to Aaron was that to preach about a God who transforms would be accepted more readily by his community, as he began to surrender daily to being transformed by the God who saves. In this he discovered that to get beyond his own predisposition of God and others, he had to reconcile his judgments of himself. The result of leading in this way of living has shaped Sondays into a community that attracts people who long to expose their heart’s pain for God’s ultimate transformation and healing. Aaron strives to move closer to God through his relationships as a husband, father, son, brother, friend and counselor.

Aaron is interested in writing and creating as an expression of what he sees happening within his community and how that relates to the healing of the world. 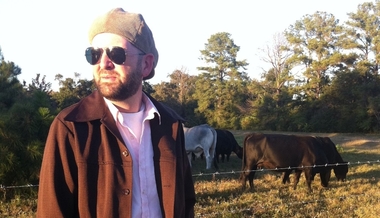 The last will be first. The consumer is consumed. The power of love takes over the love of power. Life springs forth from death.

Maybe suffering is what fuels forgiveness...and mercy and peacemakers and patience and love.

Where the Spirit of Lord is, there is freedom. Written by Aaron Edwards. Music by www.aaronstrumpel.com

Give Up And Die

Aaron Edwards talks about his condition, “The Suicide Disease,” and surrendering to Jesus.

Everyone who loves is born of God and knows God.

How could Christ’s birth – such a small interruption – have such a huge impact? Pastor Aaron Edwards on a baby bringing ultimate healing.